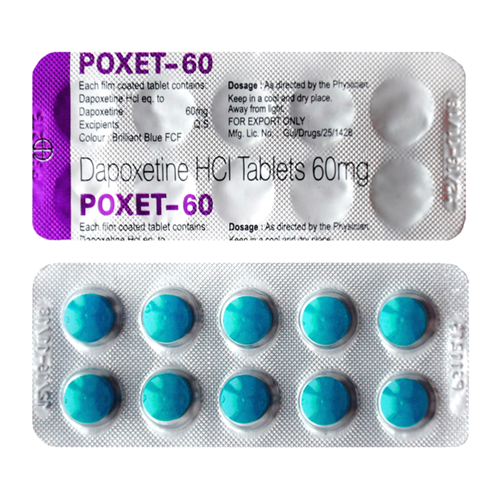 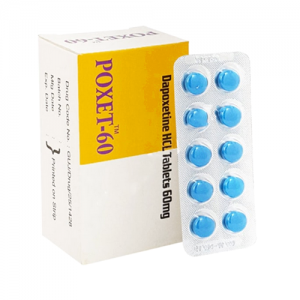 Poxet™-60 is a drug for the treatment of Premature ejaculation (PE) from the Indian manufacturer Sunrise Remedies Pvt.Ltd.

Poxet™-60 is a round-shaped tablet with a biconvex surface, covered with a blue film shell, with the active substance Dapoxetine Hydrochloride. 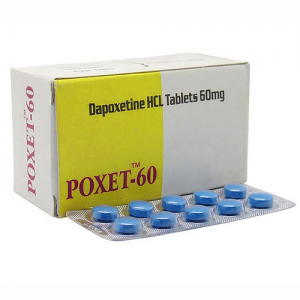 Poxet™-60 Dapoxetine HCL is used to treat premature ejaculation (PE) in adult men aged 18 to 64 years. Poxet™-60 is ideal for patients who meet the following criteria:

Poxet™-60 Dapoxetine HCL should be taken, if necessary, only as a treatment – before the intended sexual intercourse.

Poxet™-60 for the treatment of Premature ejaculation (PE)

Diagnosis of PE is not difficult and is based on the patient’s complaints about the insufficient duration of sexual intercourse. For an objective assessment and determination of the severity of premature ejaculation, special questionnaires have been developed, which, however, have not found widespread use.

Ejaculation is a reflex that closes in the cerebral cortex. When a certain level of stimulation of this zone is reached, ejaculation occurs. In some conditions, the threshold for triggering this reflex is lowered, and ejaculation occurs earlier. Such conditions include, for example, paracentral lobule syndrome. It manifests itself in childhood with nocturnal urinary incontinence (enuresis). During puberty, early emissions are observed with this syndrome, and with the onset of sexual life, the problem of premature ejaculation arises.

The head of the penis is normally an extremely sensitive part of the male body. But in some men, the sensitive head exceeds the average level and borders on pain. This problem is aggravated by excessive or narrowed foreskin (phimosis), when the head is almost always closed and practically not exposed to contact with the external environment.

A short frenulum of the penis. The frenulum, along with the head, is a highly sensitive area.

With insufficient length of the frenulum during sexual intercourse, its tension occurs, which causes additional stimulation and leads to premature uncontrolled ejaculation.

Diseases that are accompanied by a decrease in the duration of sexual intercourse.

These include: chronic prostatitis, calliculitis, vesiculitis, sexually transmitted infections, urethritis, balanoposthitis, hyperthyroidism, etc. This reason is characteristic of the secondary form of premature ejaculation. The identification and full-fledged treatment of these diseases leads to an elongation of sexual intercourse.

How does Poxet™-60 Dapoxetine HCL work?

Poxet™-60 Dapoxetine HCL in the treatment of PE was established during five double-blind clinical trials with placebo control, in which a total of 6081 patients were randomized. The age of the patients was 18 years and older.

How to use Poxet™-60 Dapoxetine HCL?

Poxet™-60 Dapoxetine HCL should be taken, if necessary, approximately 1-3 hours before sexual intercourse. The frequency and severity of side effects when taking the drug at a dose of 60 mg increases.

If the patient has orthostatic reactions after taking the drug at the initial dose, do not increase the dose to 60 mg. After the first four weeks of therapy (or at least after taking the drug 6 times), the doctor should conduct a thorough assessment of the benefit-risk ratio of Poxet™-60 Dapoxetine HCL in each case to decide whether it is appropriate to continue treatment with this drug.

What are the contraindications of Poxet™-60 Dapoxetine HCL?

What are the Side Effects of Poxet™-60 Dapoxetine HCL?