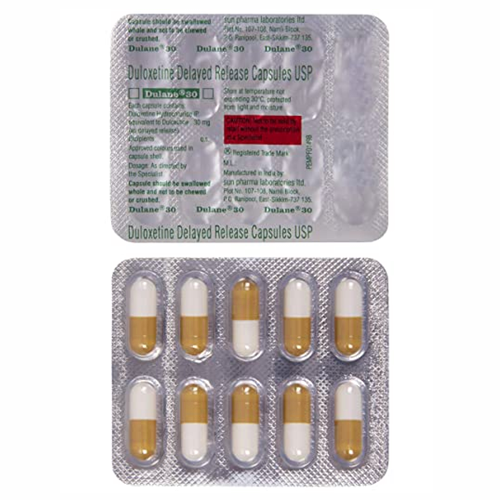 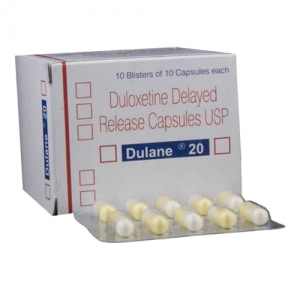 Dulane® 20 / 30 / 40 / 60 mg is a drug that has an antidepressant effect. Dulane® is an Indian Generic Cymbalta that contains duloxetine, a substance that is a combined inhibitor of norepinephrine and serotonin reuptake.

Duloxetine slightly inhibits dopamine uptake, has practically no affinity for histamine, cholinergic, dopamine and adrenergic receptors. The effectiveness of the drug in the treatment of depression is due to the inhibition of the reuptake of norepinephrine and serotonin, resulting in increased noradrenergic and serotonergic neurotransmission in the central nervous system.

Dulane® also has some analgesic effect, which, theoretically, is due to a decrease in the rate of transmission of pain impulses to the central nervous system.

Dulane® Duloxetine is used to relieve pain in various painful conditions, including diabetic neuropathy, fibromyalgia. Duloxetine is the most prescribed antidepressant in the United States (Generic Cymbalta).

Dulane® Duloxetine has a dual effect on both serotonin and norepinephrine. It has an FDA-registered indication – fibromyalgia (and this is a frequent manifestation of somatoform disorder). For some patients with anxiety disorders, switching from SSRIs to Dulane® improved their condition and quality of life (they called its effect “milder”).

How to take Dulane® Duloxetine?

Dulane® Duloxetine is taken orally, Capsules should be swallowed whole, without chewing or crushing. Do not add the drug to food or mix it with liquids, because this can damage the intestinal-soluble shell of pellets.

The initial and recommended maintenance dose is 60 mg once a day, regardless of food intake.

In clinical studies, the safety of doses from 60 to a maximum dose of 120 mg / day was evaluated. However, there was no clinical evidence that patients who did not respond to the initial recommended dose showed any improvement with an increase in dose. The response to therapy is usually noted 2-4 weeks after the start of treatment. In order to avoid relapse after achieving a response to antidepressant therapy, it is recommended to continue treatment for several months. In patients who respond positively to duloxetine therapy, with a history of recurrent cases of depression, further long-term therapy at a dose of 60 to 120 mg / day is possible.

The recommended initial dose in patients with generalized anxiety disorder is 30 mg / day, regardless of food intake. In patients with insufficient response to therapy, it is possible to increase the dose to 60 mg / day, the usual maintenance dose in most patients. In patients with concomitant depression, the initial and maintenance dose is 60 mg / day. During clinical studies, the effectiveness of doses up to 120 mg / day was shown, in addition, such dosages were evaluated from the point of view of safety. Therefore, in patients with insufficient response to a dose of 60 mg, it may be advisable to increase the dose to 90 or 120 mg / day. Dose increases should be based on clinical response and tolerability.

In order to avoid relapse after achieving a response to therapy, it is recommended to continue treatment for several months.

A painful form of peripheral diabetic neuropathy. The initial and recommended maintenance dose is 60 mg once a day, regardless of the meal. During clinical trials, the safety of doses from 60 to a maximum dose of 120 mg/ day, divided into equal doses, was also evaluated.

The concentration of duloxetine in plasma is characterized by significant individual variability. Therefore, in some patients with insufficient response to a dose of 60 mg / day, improvements may be noted when using a higher dose. Evaluation of the response to therapy should be carried out after 2 months. In patients with insufficient initial response, improvement of the response after this period of time is unlikely. The therapeutic effect should be evaluated regularly (at least once every 3 months).

The recommended dose of Dulane® Duloxetine is 60 mg 1 time per day. Therapy can be started with a dose of 30 mg for 1 week to allow patients to adapt to the drug before increasing the dose to 60 mg once a day. There is no evidence that higher doses provide an additional benefit, even in patients who do not respond to therapy with the drug at a dose of 60 mg / day. Higher doses are associated with a high frequency of adverse reactions.

In patients with renal insufficiency:

In patients with impaired liver function:

the drug should not be prescribed to patients with liver diseases that have led to liver failure.

Elderly patients for the treatment of generalized anxiety disorder are recommended an initial dose of 30 mg for 2 weeks before starting the use of duloxetine at a target dose of 60 mg / day. In the future, it is possible to use the drug at a dose of more than 60 mg / day to achieve a good result. Systematic evaluation of the drug intake at a dose of more than 120 mg / day was not carried out. When using duloxetine for other indications, dose adjustment depending on age is not required.

Abrupt discontinuation of therapy should be avoided

Dulane® Duloxetine is contraindicated in the therapy of patients who do not tolerate the active or auxiliary components of capsules.

Contraindications to the use of the drug Dulane® Duloxetine are also:

It is necessary to prescribe duloxetine with caution to patients with a tendency to suicide (such patients should be under constant supervision, because suicide attempts at the beginning of therapy are not excluded).

In addition, the drug Dulane® Duloxetine is prescribed with caution when:

With duloxetine therapy, potentially dangerous types of equipment should not be controlled.

Side Effects of Dulane® Duloxetine

Against the background of Dulane® Duloxetine therapy, such undesirable effects may occur in patients: