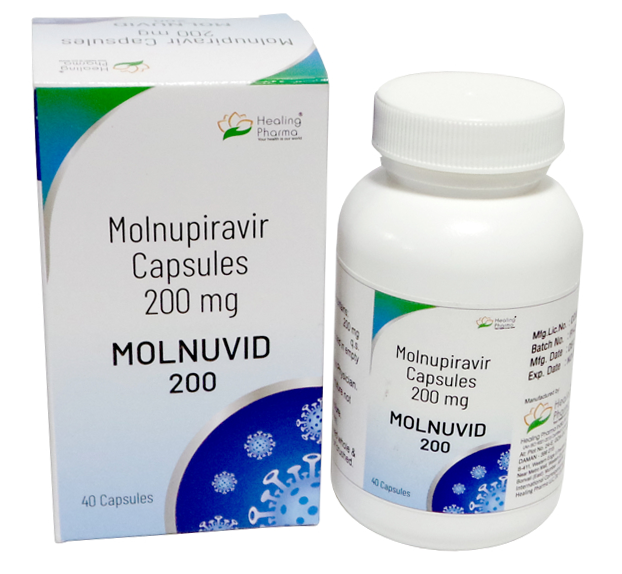 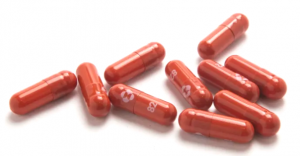 Molnuvid®-200 is used for the treatment of a new coronavirus infection (COVID-19) of mild or moderate severity in adults, including those with an increased risk of disease progression to severe, which does not require additional oxygen therapy. The experimental drug Molnuvid®-200 Molnupiravir reduced the risk of hospitalization or death by almost half among high-risk patients with COVID-19 coronavirus infection caused by the new SARS-CoV-2 coronavirus and occurring with mild to moderate severity. If we talk about the risk of death, it has decreased by an impressive 94%.

How to take Molnuvid®-200 Molnupiravir?

The drug Molnuvid®-200 Molnupiravir is taken orally regardless of food intake.

Capsules should be swallowed whole, without opening, crushing or chewing them, washed down with a sufficient amount of liquid (for example, a glass of water).

The use of the drug Molnuvid®-200 Molnupiravir is possible only under the supervision of a doctor.

Treatment with the drug Molnuvid®-200 should be started as early as possible after the diagnosis of a new coronavirus infection (COVID-19) and / or within 5 days after the appearance of the first symptoms of the disease.

What is the dosage of Molnuvid®-200 Molnupiravir ?

For the treatment of a new coronavirus infection (COVID-19) caused by the SARS-CoV-2 virus, the following dosage regimen is recommended in adults:

Molnuvid®-200 is a generic Molnupiravir? 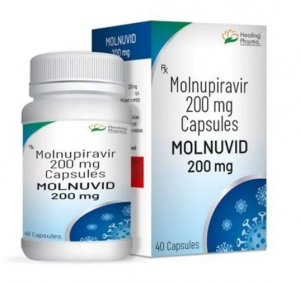 Merck & Co. has issued non-exclusive voluntary licenses to Indian generic drug manufacturers so that cheap copies of molnupiravir appear in more than a hundred countries with below-average incomes (LMIC).

The development of Molnupiravir is handled by Merck & Co., which bought the rights to it from Ridgeback Biotherapeutics, which in turn licensed the molecule from Emory University.

The FDA Advisory Committee voted for molnupiravir to be approved for outpatient treatment of covid. However, experts, firstly, have not yet found out the reason why the effectiveness of molnupiravir has sharply decreased, and, secondly, called for treating this drug with some caution.

What are the contraindications of Molnuvid®-200 Molnupiravir?

In patients with severe renal insufficiency (GFR less than 30 ml/min / 1.73 m2) and in patients with impaired liver function, monitoring of blood biochemical parameters is necessary.

The therapeutic efficacy of molnupiravir did not depend on the duration of covid symptoms or the specifics of the risk factor, including the age of patients. Molnupiravir has demonstrated consistent effectiveness in resisting viral variants, including gamma, delta and mu strains of SARS-CoV-2, which accounted for almost 80% of cases of infection with the new coronavirus in a clinical trial.

The safety profile of molnupiravir as a whole did not differ from that of placebo: 35% and 40% of the subjects experienced adverse reactions, and the negative phenomena caused by the prescription of the drug were noted in 12% — against 11% in the control group.

Among the most common adverse events in the molnupiravir group: diarrhea (in 3% of patients), nausea (2%), dizziness (1%), headache (1%). All adverse reactions were mild to moderate in severity.

Among the mandatory criteria for inclusion in the trial: lack of vaccination against covid; at least one risk factor for poor outcomes (age 60 years and older, diabetes mellitus, obesity, chronic kidney disease, serious cardiovascular disease, chronic obstructive pulmonary disease, cancer at the active stage); the period of manifestation of symptoms of the disease is no longer 5 days before randomization.

The main characteristics of the participants: median age 44 years (18-88); 49% received molnupiravir or placebo within 3 days after the manifestation of covid symptoms; the main risk factors were obesity in 77%, age 60 years and older in 14%, diabetes mellitus in 14%.

The subjects were prescribed a placebo or 800 mg of molnupiravir orally every 12 hours for 5 days.

The primary endpoint was determined by the proportion of participants hospitalized and/or deceased from the moment of randomization to the 29th day of the study.

It is noteworthy that among those who received molnupiravir, no deaths were recorded at all, whereas in the control group there were 8. The appointment of molnupiravir led to a reduction in the risk of death by a relative 94%: RR 0.06 (95% CI: 0.00–1.01).

Side effects of Molnuvid®-200 Molnupiravir

The most frequent adverse reactions reported during treatment with Molnuvid®-200 Molnupiravir at a dose of 800 mg every 12 hours for 5 days and for 14 days after taking the last dose were diarrhea (3%), nausea (2%), dizziness (1%) and headache (1%), which had a mild or moderate severity.

From the gastrointestinal tract:

From the skin and subcutaneous tissues:

According to the clinical study of molnupiravir, there were no adverse events associated with its administration.

Risk factors for the progression of COVID-19 to severe course

The use of the  Molnuvid®-200 Molnupiravir Pills is possible only under the supervision of a doctor.

With the development of a side effect, it is necessary to report this in accordance with the established procedure for the implementation of pharmacovigilance measures.

Since reproductive toxicity has been observed in animal studies of molnupiravir, the drug Molnuvid®-200 Molnupiravir should not be prescribed to pregnant and presumably pregnant women.

When prescribing the drug Molnuvid®-200 Molnupiravir to women capable of childbearing (including postmenopausal women less than 2 years old), it is necessary to confirm a negative pregnancy test result before starting treatment. A repeat pregnancy test should be performed after the end of taking the drug.

Women who are capable of childbearing need to fully explain the risks and carefully instruct them on the use of effective methods of contraception during the administration of the drug and within 4 days after its termination. Under the assumption of a possible pregnancy, it is necessary to immediately cancel taking the drug and consult a doctor.

Due to the fact that animal studies have shown the reproductive toxicity of molnupiravir, it is recommended to use effective methods of contraception in men during the administration of the drug and for 3 months after its termination.

Use during pregnancy and lactation

Contraindicated use during pregnancy and during breastfeeding.

Use in cases of impaired liver function

Dose adjustment in patients with hepatic insufficiency is not required.

Use in cases of impaired renal function

Dose adjustment in patients with renal insufficiency is not required.

It is contraindicated in children and adolescents under the age of 18.

Use in elderly patients

Dose adjustment is not required.

Store at a temperature not exceeding 30 °C. Keep out of reach of children.

2 years. Do not use after the expiration date.