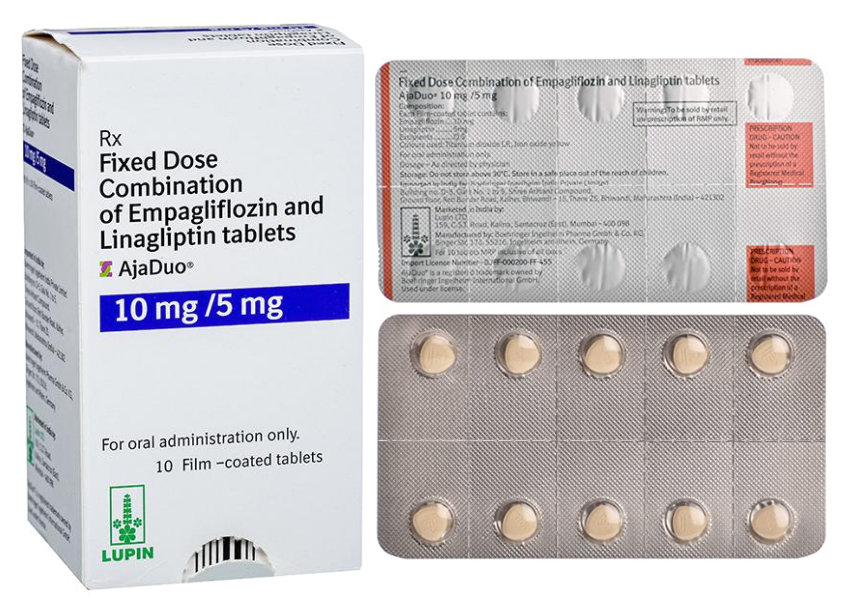 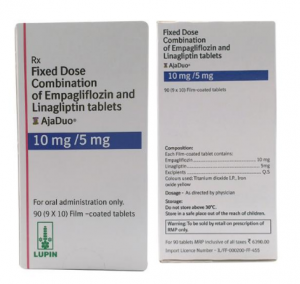 AjaDuo® 10mg/5mg is indicated in patients with type 2 diabetes mellitus as a supplement to diet and exercise in order to improve glycemic control.

The combination of Empagliflozin and Linagliptin is used to treat type 2 diabetes, which helps control glycemia. Empagliflozin is activated and helps eliminate glucose throughout the blood circulation.  AjaDuo® 10mg/5mg is used in association with dietary regimen and exercise to improve glycemic control in adults with type 2 diabetes mellitus.

AjaDuo® 10mg / 5mg tablet is taken orally, regardless of food intake, at any time of the day.

Recommended starting dose of AjaDuo® it is 5 mg of linagliptin + 10 mg of empagliflozin once a day, orally.

Patients who tolerate AjaDuo® well at a dose of 5 mg + 10 mg, if it is necessary to improve glycemic control, the dose can be increased to 5 mg of linagliptin + 25 mg of empagliflozin once a day.

AjaDuo® 10mg/5mg can be taken regardless of food intake, at any time of the day.

If you miss the next dose of the drug, if there are 12 hours or more left before the next dose, the patient should take AjaDuo® 10mg / 5mg as soon as he remembers about it.

Empagliflozin may increase the diuretic effect of thiazide and loop diuretics and increase the risk of dehydration and hypotension.

Caution should be used in patients at risk of hypovolemia (use of hypotensive drugs with a history of arterial hypotension); with gastrointestinal diseases leading to fluid loss; use in combination with sulfonylurea derivatives or insulin; infections of the genitourinary system; adherence to a low-carbohydrate diet; diabetic ketoacidosis in the anamnesis; low secretory activity of β-pancreatic cells; in patients over the age of 75 years.

When using sodium-dependent glucose transporter type 2 inhibitors, including empagliflozin, rare cases of diabetic ketoacidosis have been reported. In some of these cases, the manifestations were atypical and expressed in a moderate increase in blood glucose concentration (no more than 14 mmol/l (250 mg/dl)).

The risk of developing diabetic ketoacidosis should be taken into account in case of non-specific symptoms such as nausea, vomiting, lack of appetite, abdominal pain, pronounced thirst. difficulty breathing, disorientation, unmotivated fatigue or drowsiness. If such symptoms develop, the patient should be immediately examined for ketoacidosis, regardless of the concentration of glucose in the blood. The use of this combination should be discontinued or temporarily suspended until a diagnosis is established.

Patients who may have a higher risk of developing diabetic ketoacidosis when taking sodium-dependent glucose transporter type 2 inhibitors include patients who follow a diet with a very low carbohydrate content (because this combination can lead to an increase in the production of ketone bodies), patients with severe dehydration, a history of ketoacidosis or low secretory activity of beta cells. In such patients, the drug should be used with caution. Caution is required when reducing the dose of insulin in insulin-dependent patients.

With the combined use of AjaDuo ® 10mg / 5mg with sulfonylurea derivatives or with insulin, it may be necessary to reduce the dose of the latter due to the risk of hypoglycemia.

Cases of acute pancreatitis have been reported in patients taking linagliptin. In case of suspected pancreatitis, the drug should be discontinued.

The effectiveness of empagliflozin depends on kidney function. Therefore, it is recommended to monitor kidney function before using this combination and periodically during treatment (at least once a year).

Osmotic diuresis accompanied by therapeutic glucosuria, which may occur against the background of the use of sodium-dependent glucose transporter type 2 inhibitors, may lead to a moderate decrease in blood pressure. Therefore, caution should be exercised in cases where a decrease in blood pressure is undesirable, for example, in patients with cardiovascular diseases; patients taking antihypertensive drugs (with a history of arterial hypotension), as well as in patients over 75 years of age.

If a patient taking the drug develops conditions that can lead to fluid loss (for example, in gastrointestinal diseases), the patient’s condition, blood pressure, and hematocrit and electrolyte balance should be carefully monitored. It may require temporary, up to the restoration of the water balance, discontinuation of the drug.

Influence on the ability to drive vehicles and mechanisms

Patients should be careful when driving vehicles and mechanisms, because when using the drug (especially in combination with sulfonylurea derivatives and / or insulin), hypoglycemia may develop.

Contraindicated use during pregnancy and lactation (breastfeeding).

AjaDuo® 10mg / 5mg contraindications for use in children and adolescents under the age of 18.

The use of AjaDuo® 10mg / 5mg in renal dysfunction

The use of AjaDuo® 10mg / 5mg for liver function disorders

Patients with impaired liver function do not need dose adjustment.

The use of the drug in patients older than 85 years is contraindicated.

Combination of Empagliflozin and Linagliptin

The mechanism of action of empagliflozin, independent of insulin metabolism and the functional state of pancreatic beta cells, differs from and complements the mechanisms of action of drugs of other groups currently used for the treatment of type 2 diabetes mellitus (DM2). Empagliflozin has been found to potentiate the action of all hypoglycemic drugs with other mechanisms of action, including dipeptidyl peptidase-4 (DPP-4) inhibitors. Long-term use of a combination of empagliflozin and linagliptin resulted in a significant increase in insulin sensitivity, compared with the use of linagliptin and empagliflozin in the form of monotherapy.

Empagliflozin is a reversible, highly active, selective and competitive inhibitor of the type 2 sodium-dependent glucose transporter (NRPG-2) with a concentration value required to inhibit 50% of the enzyme activity (IC50) equal to 1.3 nmol.

The glucose filtered in the kidneys is almost completely (up to 90%) reabsorbed with the help of HPG-2 and to a lesser extent with the help of HPG-1, which are located, respectively, in the proximal segments (S1 and S3) of the renal tubules. Empagliflozin, inhibiting the reabsorption of glucose in the kidneys, leads to an increase in its excretion by the kidneys, which causes a decrease in the concentration of glucose in the blood, both after a single oral administration of the drug and with prolonged use. Empagliflozin improves glycemic indices both on an empty stomach and after meals. In addition, the excretion of glucose by the kidneys causes a loss of calories and leads to a decrease in body weight.

In addition, initiation of empagliflozin therapy leads to an increase in sodium excretion, which causes osmotic diuresis and a decrease in intravascular volume. The mechanism of action of empagliflozin does not depend on the function of beta cells and the insulin pathway, resulting in a low risk of hypoglycemia.

Linagliptin is an inhibitor of the enzyme DPP-4, which is involved in the inactivation of hormones incretins – glucagon-like peptide type 1 (GLP-1) and glucose-dependent insulinotropic polypeptide (GIP). Linagliptin actively binds to the enzyme DPP-4 (reversible bond), which causes a steady increase in the concentration of incretins and a long-term preservation of their activity.

Linagliptin selectively binds to the enzyme DPP-4 and has 10,000 times greater selectivity compared to the enzymes DPP-8 or DPP-9 in vitro.

From the side of metabolism:

From the respiratory system:

From the cardiovascular system:

From the digestive system:

From the urinary system:

From the genital organs and breast:

From the skin and subcutaneous tissue: