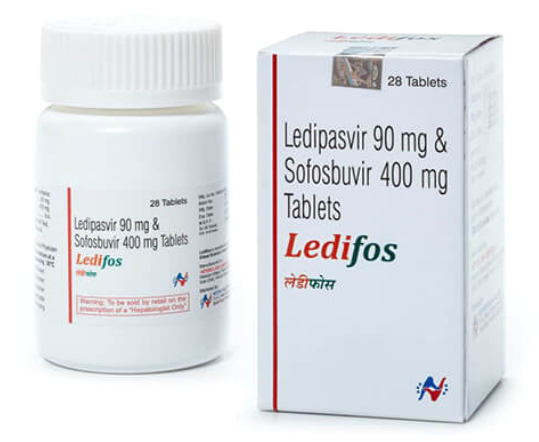 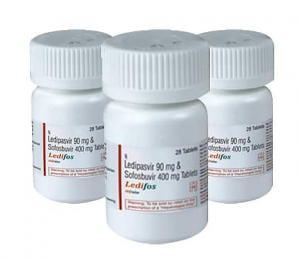 Ledifos® 90mg/400mg are tablets for the treatment of chronic hepatitis C genotypes 1, 4, 5 and 6. The hepatitis C virus is genetically heterogeneous and has a wide variety of forms, so treatment is prescribed depending on the specific genotype of the virus that the person is infected with.

During the trials, after 12 weeks, more than 90% of patients were reported to have no virus.

Sofosbuvir blocks elements that are important for the functioning of the cell and are used by the hepatitis C virus to copy its own RNA, that is, it prevents the virus from multiplying. The action of ledipasvir is aimed at blocking the NS5A protein of the hepatitis C virus, which also stops its spread.

In November 2014, a highly effective innovative new-generation drug Harvoni from the American company Gilead Sciences appeared on the pharmaceutical market for the first time, the use of which is approved in the USA and EU countries. The drug effectively treats hepatitis C of both the 1st and 4th genotypes of HCV. Harmony therapy is the first FDA-approved treatment regimen that does not involve simultaneous combination of the drug with interferon-alpha and greatly simplifies the choice of a course of therapy.

Hepatitis C is a very serious disease with irreversible disorders: cirrhosis of the liver, liver failure, hepatocellular carcinoma (HCC, liver cancer), abdominal infections, oncological problems. Since the beginning of the use of this latest antiviral medicine, it has become much easier to prevent the development of the above severe conditions and diseases and the unpleasant consequences in patients are becoming much less.

The drug Ledifos® 90mg/400mg is developed for the treatment of patients with hepatitis C genotypes 1 and 4 in chronic form, accompanied by cirrhosis of the liver or without complications.

Ledifos® 90mg/400mg is effective both for patients who are receiving treatment for the first time, and for patients “with experience” who have negative experience of previous treatment with other antiviral drugs. This drug is also effective for people with poor tolerance of traditional medicines, as it has low toxicity.

The duration of the course of treatment and the schedule of admission are determined by the attending physician and depend on the specific genotype of the hepatitis C virus that the patient is infected with, as well as on the stage of the disease.

What is the dosage of Ledifos® 90mg/400mg tablets?

The most accurate recommendations on the dosage and duration of the course of treatment can be found from the attending physician, who prescribes the medicine based on the individual characteristics of the patient.

If there is no sustained virological effect after the end of the 12-week course of therapy with the drug, the patient does not feel better, treatment should be interrupted, since further administration of Ledifos® 90mg / 400mg will not give results. If the remedy is ineffective, you should choose another medicine for treatment.

If for some reason you missed taking the drug, take the medicine as soon as you remember about it or skip the dose and take it at the usual time.

In case of an overdose of Ledifos® 90mg/400mg, you should consult a doctor and undergo a series of examinations to determine the effect of an increased dose of active substances on the body. There is no sufficient data on the effect of overdose.

Interaction with other medicinal products

Ledifos® 90mg/400mg, as with the Harmony interaction, is effective in combination with other hepatitis C medications.

What are the contraindications of Ledifos® 90mg/400mg?

If there is renal and hepatic insufficiency, the course of treatment is carried out under the supervision of a specialist. Among other limitations:

A woman should use reliable contraceptives while taking Ledifos® 90mg/400mg, since the effect of Ledifos® 90mg/400mg on the course of pregnancy itself and the fetus has not been fully studied. If the course is prescribed during lactation, breastfeeding should be abandoned, since the drug is able to penetrate into the mother’s milk. This medicine is not prescribed to children, since its effect on children has not been studied. Take Ledifos® 90mg/400mg on the recommendation of a doctor strictly at the specified dose. If other medications have to be taken during the treatment period, the doctor should be aware of this and be sure to monitor possible adverse drug interactions. The doctor should also be informed about adverse reactions if they occur during or after taking Ledifos® 90mg /400mg.

What are the side effects when taking Ledifos® 90mg/400 mg?

You should be especially attentive to your feelings during the first weeks of taking the medication. If jaundice, ascites, shortness of breath, swelling, severe itching appear, you should immediately contact your doctor and quickly undergo an examination.

After starting to take Ledifos® 90mg / 400mg, minor disorders may occur in the form of loss of strength or headaches. Such a reaction of the body only confirms the effectiveness of treatment, so it is very important to complete the course. When treating hepatitis C in combination with Ribavirin, the percentage of side effects may increase.

For patients with cirrhosis of the liver, the drug is safe and effective if all precautions are taken. By the absolute majority of patients, the drug is tolerated normally and gives a good result.