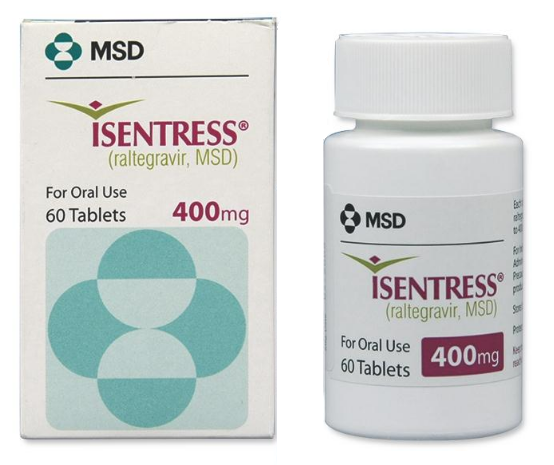 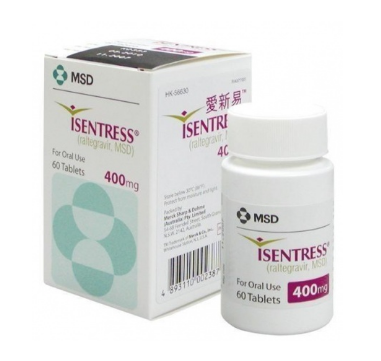 Isentress® Raltegravir 400mg inhibits the catalytic activity of HIV integrase, an enzyme involved in HIV virus replication. Inhibition of integrase prevents covalent introduction (integration) of the HIV genome into the genome of the host cell in the early stages of infection. HIV genomes not included in human DNA are not able to induce the production of new viral particles, therefore, suppression of the integration process prevents the spread of viral infection in the body. The inhibitory ability of raltegravir against human phosphotransferases, including DNA polymerases α, β and γ, is expressed insignificantly.

What is the Form of Isentress® 400mg tablets?

Isentress® 400mg Tablets, film-coated pink, oval, biconvex, engraved “227” on one side and smooth on the other.

These tablets are indicated in combination with other antiretroviral (ARV) drugs for the treatment of HIV-1 infection in adult patients. The Patient Information and Instructions for Use also are available.

What are the indications for the use of Isentress® 400mg tablets?

Isentress® 400mg tablets are used for the treatment of HIV-1 infection in combination with other antiretroviral drugs in adults, adolescents and children from 6 years of age and with a body weight of at least 25 kg, both previously receiving and not receiving antiretroviral therapy.

How does Isentress® 400mg work?

The virus produces an enzyme called HIV integrase. This enzyme helps the virus to multiply in the cells of your body. Isentress® 400mg stops the action of this enzyme . When used with other medications, Isentress® 400mgcan reduce the amount of HIV in the blood (this is called “viral load”) and increase the number of CD4 cells (a type of white blood cells that play an important role in maintaining a healthy immune system). and which helps fight infections). Reducing the amount of HIV in your blood can improve your immune system. This means that your body can fight infections better.

At a plasma concentration of 31±20 nmol/L, raltegravir suppressed virus replication by 95% (95% inhibitory concentration, IK95) in cell cultures of human T-lymphocytes infected with the H9IIIB variant of HIV-1 adapted to cell cultures compared with the control virus-infected cell culture. IC95 was achieved at concentrations from 6 to 50 nmol/L in cultures of human mitogen-activated peripheral blood mononuclears infected with various primary clinical HIV-1 strains, including strains of 5 non-B subtypes of HIV-1, as well as strains resistant to reverse transcriptase inhibitors and HIV protease inhibitors.

What are the contraindications to the use of Isentress® 400mg?

Breastfeeding is not recommended for HIV-infected mothers in order to avoid postnatal transmission of HIV to children. If it is necessary to use the drug during lactation, it is recommended to stop breastfeeding.

Resistance to the drug Isentress® 400mg

Recombinant viruses with a single primary mutation (Q148H, K or R or N155H) were characterized by a reduced ability to replicate and reduced sensitivity to raltegravir in vitro. Secondary mutations of the virus further reduced the sensitivity to raltegravir, sometimes compensating for the reduced ability of the virus to replicate.

How to take Isentress® 400mg for adults?

No specific symptoms of an overdose of Isentress® 400mg were detected. Raltegravir was well tolerated by healthy volunteers in the mode of 1600 mg once a day and 800 mg twice a day, without any manifestations of toxicity. A single dose of 1800 mg per day in phase II / III studies did not have a toxic effect. Based on the available data, it can be concluded that raltegravir is well tolerated in doses up to 800 mg twice a day, as well as when taken with drugs that increase its exposure by 50-70% (for example, tenofovir and atazanavir). Raltegravir has a wide therapeutic range, so the potential for toxic effects as a result of overdose is limited.

Treatment: in case of overdose, it is necessary to follow standard recommendations, such as removing the non-absorbed drug from the gastrointestinal tract, monitoring vital signs, including ECG, prescribing symptomatic therapy. There is no data on the effectiveness of dialysis in case of overdose with Isentress® 400mg.

Use in children and adolescents

What are the side effects of Isentress® Raltegravir 400mg?

Below are data on adverse events observed in clinical trials, with varying degrees of probability associated with the drug Isentress® 400mg or its combination with another ART.