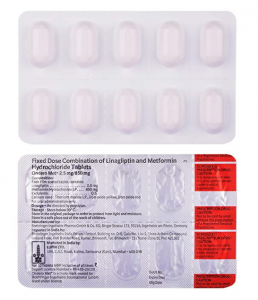 Before using the drug Ondero Met® 2.5 mg / 500 mg, a doctor’s consultation is necessary.

Ondero Met® 2.5 mg / 500 mg contains a combination of linagliptin and metformin. Linagliptin and metformin are oral diabetes medications that help control blood sugar levels. Metformin works by reducing the production of glucose (sugar) in the liver and reducing the absorption of glucose in the intestine. Linagliptin works by regulating the levels of insulin that your body produces after eating.

Ondero Met® 2.5 mg / 500 mg is used together with diet and exercise to improve blood sugar control in adults with type 2 diabetes.

The dosage should be selected individually based on the patient’s current treatment regimen, its effectiveness and tolerability. The maximum recommended daily dose of Ondero Met® 2.5 mg / 500 mg is 5 mg of linagliptin and 2000 mg of metformin.

In patients with inadequate control of diabetes mellitus on the background of double combination therapy with the use of insulin and the maximum tolerated dose of metformin, the drug Ondero Met® 2.5 mg / 500 mg is usually recommended to be used in such a way that the dose of linagliptin is 2.5 mg twice a day (daily dose of 5 mg), and the dose of metformin remains unchanged. When using the Ondero Met® 2.5 mg / 500 mg in combination with insulin, a lower dose of insulin may be required to reduce the risk of hypoglycemia.

Symptoms: During controlled clinical trials conducted in healthy volunteers, single doses of linagliptin reaching 600 mg (equivalent to 120 times the recommended dose) were well tolerated. A person has no experience of using the drug in doses exceeding 600 mg.

Therapy: In case of overdose, the usual supportive measures are used, for example, removal of the unabsorbed drug from the gastrointestinal tract, symptomatic therapy. Lactic acidosis belongs to the category of urgent medical conditions, treatment in such cases should be carried out in a hospital.

The most effective method of removing lactate and metformin is hemodialysis.

What happens if I miss a dose?

You should not use Onder Met® 2.5 mg / 500 mg if you are allergic to metformin (Actoplus Met, Avandamet, Fortamet, Glucophage, Riomet) or linagliptin, or:

Some people taking metformin develop a severe condition called lactic acidosis. This may be more likely if you have liver or kidney disease, heart failure, heart attack or stroke, severe infection, if you are over 65, if you are dehydrated or if you drink a lot of alcohol. Talk to your doctor about your risk.

The drug Ondero Met® 2.5 mg / 500 mg can be prescribed in combination with sulfonylureas (triple combination therapy) in addition to diet and exercise to patients in whom the use of metformin and sulfonylureas derivatives in maximum tolerated doses is not effective enough.

The drug Ondero Met® 2.5 mg / 500 mg can be prescribed in combination with insulin (triple combination therapy) in addition to diet and exercise to patients in whom the use of metformin and insulin does not provide adequate glycemic control.

Ondero Met® 2.5 mg / 500 mg is a combination of two hypoglycemic drugs with complementary mechanisms of action to improve glycemic control in patients with type 2 diabetes mellitus: linagliptin, a dipeptidyl peptidase–4 (DPP-4) inhibitor, and metformin hydrochloride, a representative of the biguanide class.

Linagliptin is an inhibitor of the enzyme dipeptidyl peptidase-4 (DPP-4), which is involved in the inactivation of hormones incretins – glucagon-like peptide-1 (GLP-1) and glucose-dependent insulinotropic polypeptide (GIP). These hormones are rapidly destroyed by the enzyme DPP-4. Both of these hormones are involved in the physiological regulation of glucose homeostasis. The basal level of incretin secretion during the day is low, it rises rapidly after eating. GLP-1 and GIP enhance insulin biosynthesis and its secretion by pancreatic beta cells at normal and elevated blood glucose levels. In addition, GLP-1 reduces the secretion of glucagon by pancreatic alpha cells, which leads to a decrease in glucose production in the liver. Linagliptin binds actively and reversibly to DPP-4, which causes a steady increase in incretin levels and a long-term preservation of their activity. Linagliptin increases glucose-dependent insulin secretion and reduces glucagon secretion, resulting in improved glucose homeostasis. Linagliptin binds to DPP-4 selectively, in vitro its selectivity for DPP-4 is higher than the selectivity for DPP-8 or DPP-9 by more than 10,000 times.

What are the contraindications for Ondero Met® 2.5 mg / 500 mg tablets?

The safety of linagliptin, administered at a dose of 2.5 mg twice a day (or at a bioequivalent dose of 5 mg once a day) in combination with metformin, has been studied in more than 6800 patients with type 2 diabetes mellitus. In placebo-controlled trials, more than 1,800 patients received a therapeutic dose of linagliptin 2.5 mg twice daily (or a bioequivalent dose of 5 mg once daily) in combination with metformin for ≥12/24 weeks.

When using Ondero Met® 2.5 mg / 500 mg in combination with a sulfonylurea derivative, hypoglycemia may develop (≥ 1 case per 10 patients).

Ondero Met® 2.5 mg / 500 mg should not be prescribed to patients with type 1 diabetes mellitus.

Lactic acidosis is a very rare but serious metabolic complication, most often occurring with acute deterioration of kidney function or cardiorespiratory diseases or sepsis. Metformin accumulation occurs with acute deterioration of kidney function and increases the risk of lactic acidosis.
In case of dehydration (severe diarrhea or vomiting, fever or decreased fluid intake), metformin should be temporarily discontinued and it is recommended to consult your doctor.

Patients receiving metformin should be cautiously prescribed medications that can dramatically worsen kidney function (for example, antihypertensive agents, diuretics and NSAIDs). Other risk factors for lactic acidosis are excessive alcohol consumption, impaired liver function, inadequately controlled diabetes, ketosis, prolonged hunger, any conditions associated with hypoxia, as well as concomitant use of medications that can cause lactic acidosis.
Patients and/or caregivers should be informed about the risk of lactic acidosis. Lactic acidosis is characterized by acidotic dyspnea, abdominal pain, muscle cramps, asthenia and hypothermia, accompanied by coma. In case of suspicious symptoms, the patient should stop taking metformin and immediately consult a doctor. Diagnostic laboratory indicators: a decrease in blood pH (<7.35), an increase in plasma lactate levels (>5 mmol/ L) and an increase in the ratio of the anion interval and lactate /pyruvate.

The use of iodized contrast agents

Intravascular administration of iodized contrast agents in radiological studies can lead to renal failure, which can cause the accumulation of metformin and increase the risk of lactic acidosis. In this regard, the use of the drug should be stopped in advance or during such studies and resumed 48 hours after the end of the studies and only after receiving the results of a re-evaluation of kidney function, indicating that there are no deviations from the norm.

GFR should be evaluated before the start of treatment and regularly during treatment. Metformin is contraindicated in patients with GFR <30 ml/min. and should be temporarily discontinued in the presence of conditions that alter kidney function.

Since Ondero Met® 2.5 mg / 500 mg contains metformin hydrochloride, the drug should be discontinued 48 hours before the planned surgical intervention using general, spinal or epidural anesthesia. Its use can be continued no earlier than 48 hours after surgery and only if the results of a repeated assessment of kidney function are obtained, indicating that there are no deviations from the norm.

When treating patients over 80 years of age, caution should be exercised.
Changes in the clinical status of patients with previously diagnosed controlled type 2 diabetes mellitus.

Since Ondero Met® 2.5 mg / 500 mg contains metformin, if laboratory deviations from the norm or a clinical disease are detected in patients with previously adequately controlled type 2 diabetes mellitus (especially with an uncertain diagnosis and an unclear clinical picture), it is necessary to immediately conduct an examination for the presence of ketoacidosis or lactic acidosis. The examination should include the determination of electrolytes and ketones in the blood serum, blood glucose and, if necessary, blood pH, lactate, pyruvate in the blood and the concentration of metformin. In case of acidosis in any form, taking Ondero Met® 2.5 mg / 500 mg should be stopped immediately and appropriate treatment should be prescribed.